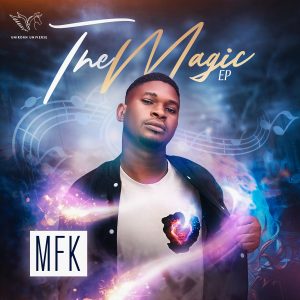 Like the avatar, some might say he hibernated for a few years, others would say he was waiting for the perfect time. But in all, after what seems like a decade we finally have Superstar MFK back and better. This time he’s out with not just a single but a body of work titled “THE MAGIC EP”.

From all indications and metrics, this is bound to be a banger. One thing we’re sure of is SleeQ, dope raps, amazing vocals and a shakara-ish blend of afropop like you’ve never heard before, giving a never heard before mix of CoalCity and Lasgidi vibes all in one.

In the past 14 years and some change, he has dropped singles here and there but nothing done in this realm or magnitude. Looking from the outside you’d know he’s here to take over in the way he multitasks by combining music with 9 – 5s, remote jobs, and street hustle without stressing it. And in all that MFK exudes the aura of a typical Nigerian youth with a never say die attitude, resilience, and drive.

MFK was born in Portharcourt, and grew up in Lagos where he partially resides, as he also spends alot of time in Enugu his place of origin.

With this EP drop, it’s safe to say we’re in for a ride as we officially kickstart the musical journey of one who without doubt or exaggeration is said to be one of the greats in the very nearest of future.