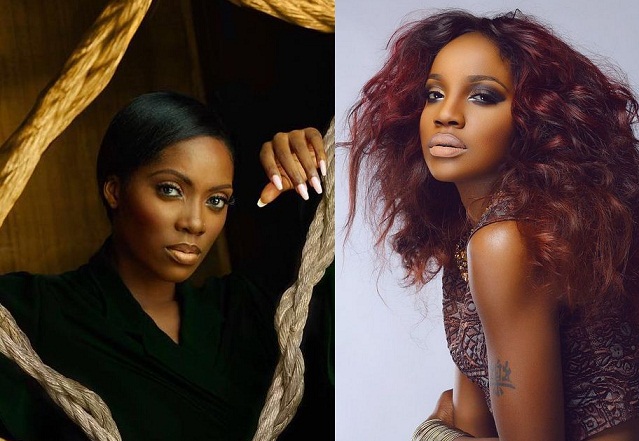 
Seyi Shay Tells her side of the story after Argument with Tiwa Savage.
On June 8, 2021, Nigerian stars, Seyi Shay and Tiwa Savage met each other at a salon. Savage was there, already getting her hair done while Shay was there to get her hair done for her Idol’s appearance on Sunday, June 13, 2021.
Tiwa Savage and Seyi Shay fight dirty in salon – VIDEO.

Seyi Shay in an exclusive interview disclosed she walked up to Tiwa as a result of pressure.

According to Seyi Shay, she went to Tayo Cuts Salon to get her done for her appearance at Nigerian Idol this coming Sunday and unfortunately for her, Tiwa was also getting her hair done. She admitted she initially wanted to ignore her and go about her business, but people who knew their history were already staring at them and she got up to greet her in order to ease the tension.

“SO I WALKED INTO THE SALOON AND I SAW TIWA. AS I SAW TIWA, I SAT DOWN AND SAID LET ME JUST CHILL. LET ME JUST MAINTAIN MY DISTANCE, CAUSE YOU KNOW PEOPLE IN THE SALOON WERE ALREADY LOOKING AT ME AND HER AND ACTUALLY, THAT WAS WHAT MADE ME STAND UP AND GO GREET HER….

I could see that people were already looking at us and no, we could just let them feel like there’s something wrong , do you understand? So I went up to her, just tapped her on her shoulder and said hi how are you? And Tiwa just responded and said hi too? After that we just exchanged glances and pleasantries and I went back to sit down.

And 20 minutes later, Tiwa came back to where I was and she said, “Seyi, in your dirty stinking life never ever greet me outside again” so I apologized and informed her I won’t, but she still continued to scream”
Speaking of the insults Tiwa Savage rained on her, Seyi Shay revealed that Tunde Ednut is biased and didn’t really post the full clip of what happened at the saloon”.

According to Seyi, She stated that Tiwa Savage insulted her, body shamed her and called her Barren. Seyi Shay disclosed that she had suffered a miscarriage which really affected her reproductive organs and she might never children again. However, Tiwa decided to rip the bandage off her wounds and poured salt on it and this really hurt her feelings.

Seyi Shay also revealed that Tiwa Savage stole her song, Lova Lova and failed to give her writing credits. Seyi claims she confronted her for her credits, but Tiwa Savage and her team always found ways to avoid the issue.

She finally revealed that the reason for Tiwa’s anger and for their longtime beef is Kizz Daniel’s Fuck Challenge. According to Seyi Shay, she hasn’t released a diss track about Tiwa and when she eventually does, Tiwa will be really pissed.

Seyi Shay once again slammed Tiwa Savage for using her only son With Teebliz, Jamil to swear for something as petty as their beef. She based her actions as stupidity and warned her to be careful of the words that come out of her mouth in public.

You can also listen below: